An Award for the MiniRingers

Posted on 7 March 2021 by kcbchurchadmin 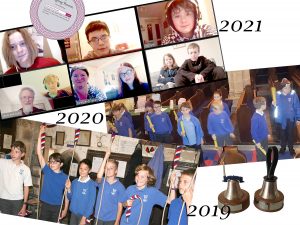 It was the ART Awards Night.

The Association of Ringing Teachers awards don’t come with golden statues, but they are highly regarded in ringing circles and they do come with a certificate and a cheque!

This year, of course, it took place on Zoom (so attendance was good!) There were some remarkable nominations in a wide variety of categories – amazing people doing amazing things. The Kildwick MiniRingers were nominated in the Youth category. I’m just pleased that we didn’t have to compete with some of the others!

The Sarah Beacham Youth Award is in memory of a lass who I rang with on several occasions who died in a motor accident some years ago. We were up against a number of other groups – the most impressive of which is a school in Guernsey which has, to a significant degree, incorporated bell ringing into their curriculum. They shared the prize with us.

This was a truly international affair. As prize winners, we shared the platform with the couple from the West Coast of the USA who invented the remarkable Ringing Room software that we are all using during this lockdown. There was another lady from Australia who has developed a community that uses Ringing Room to ring with others, regardless of where they are. The St Martin’s Guild from Birmingham won the award for inspiring leadership and the Learning the Ropes Achievement Award was won by a 9 year-old, Donny Brock from Roos in East Yorkshire. There were several others!

The cash prizes aren’t enormous (our £400 was the second highest of the night). I think I value the certificate just as highly! We will have to decide on a fitting use for this prize that will benefit present and future MiniRingers.

This entry was posted in Uncategorised. Bookmark the permalink.